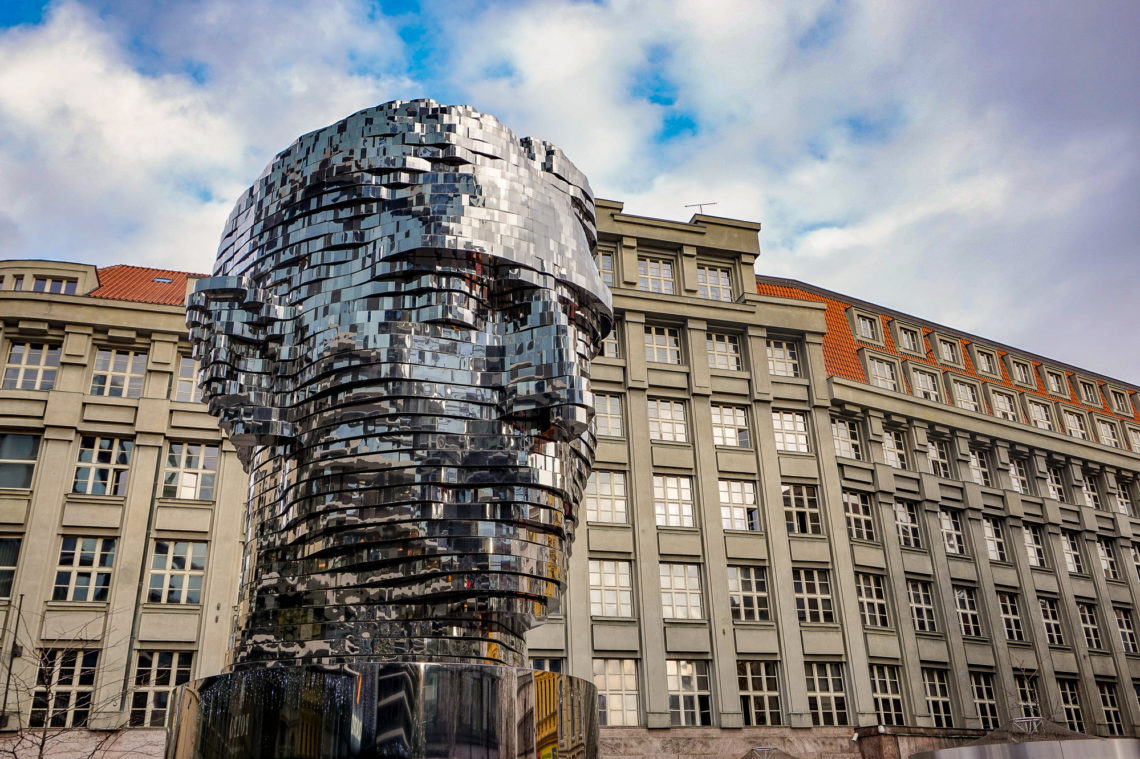 David Černý is our most well know and controversial artist. You can find his artwork almost all around Prague. This article is going to take you to walk around his 16 pieces. Let’s explore it together.

Černý gained its first attention in 1991 when he painted a Soviet tank pink. This tank commemorated the Soviet liberation of Czechoslovakia in 1945. It was quite a paradox after the 1968 occupation. In 1991, David Černý considered it as right timing to show his political stance, and he was arrested for that. And it was just a beginning.

Today, the streets of Prague are full of his provocative sculptures. Taking a tour around his quirky pieces will bring you a few steps away from the main touristic sites as well as to some residential areas that you would not discover otherwise. Some guides might show you around 10 of his pieces, but this article is going to show you 16 pieces of his controversial art.

You can find this sculpture of Trabant car with four legs in the garden of the German Embassy. It symbolizes events of summer 1989 when thousands of East German citizens arrived in Prague in their Trabant cars, left them behind, and asked for the asylum in the embassy of Western Germany. You can find the original piece in Leipzig, but I think we can be completely happy with this reproduction as well.

Location: Embassy of Germany, Vlašská 19, you need to go around the embassy to the backside with garden 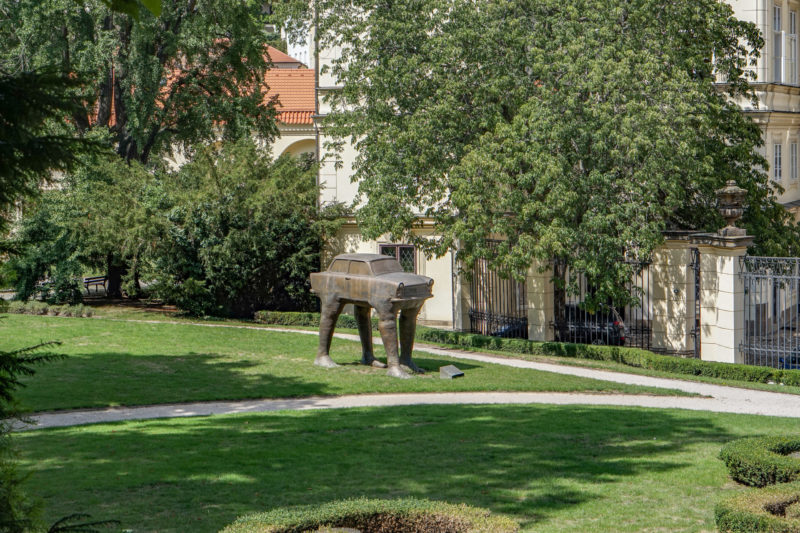 At the courtyard of the Franz Kafka Museum, you can find these two peeing gentlemen into the pool with the shape of the Czech Republic. They are moving their hips and penises in a way that they can write messages in the pool. David Černý is barely explaining the meaning behind his art, but it supposes to symbolize his thought about the Czech Republic joining the European Union. 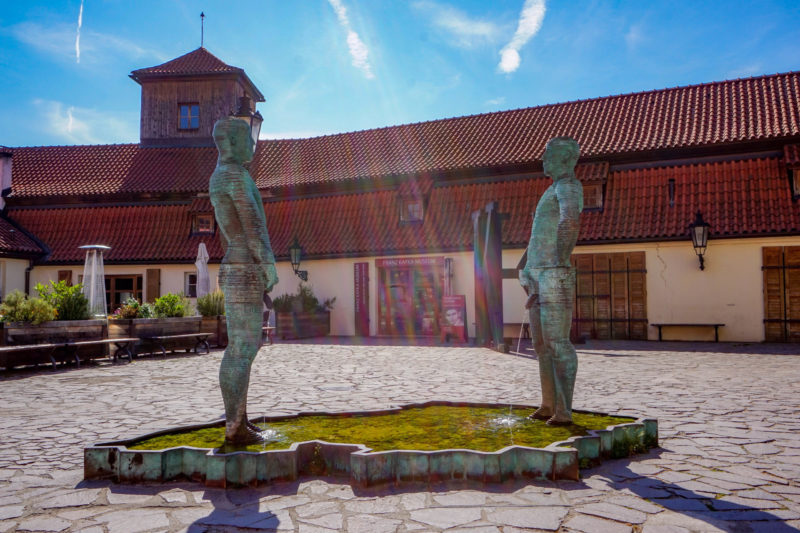 When you continue to Kampa Park, you will encounter three giant babies by the Kampa Museum. These babies have a barcode instead of the face. You can find these babies also at the Žižkov Tower, that you might see from a distance as well. Here, you can get close to them and even freely climb on their backs.

Location: Kampa Park, next to the Kampa Museum 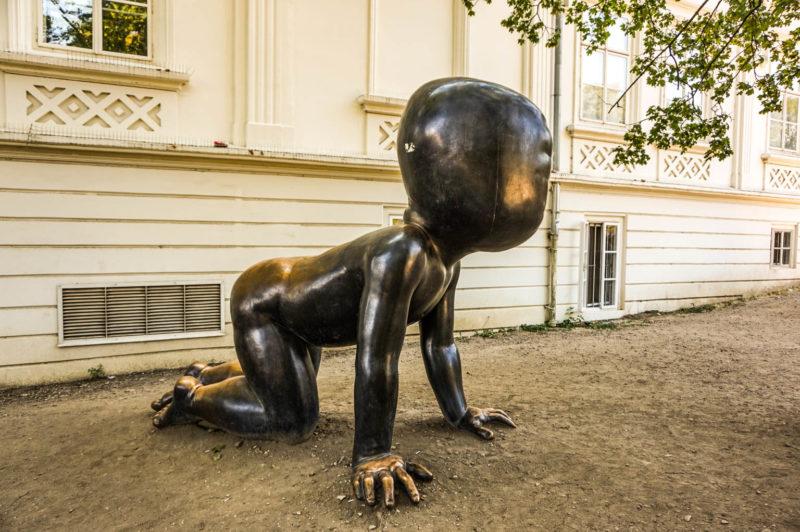 This piece is well hidden in the narrow streets of Prague, and you might easily miss it. You can find this embryo on the wall of Theatre Na Zabradlí, at a picturesque Anenské square where you can also find my favorite Tricafe. During the day, it is a barely visible embryo that is squeezed in the pipes. During the night, it is a bit illuminated, so it has a more interesting spirit. As I already mentioned, David Černý usually leaves his art without explanation. However, it might symbolize the problematic way art is made.

Location: Anenské Square, on the wall of Theatre Na Zábradlí 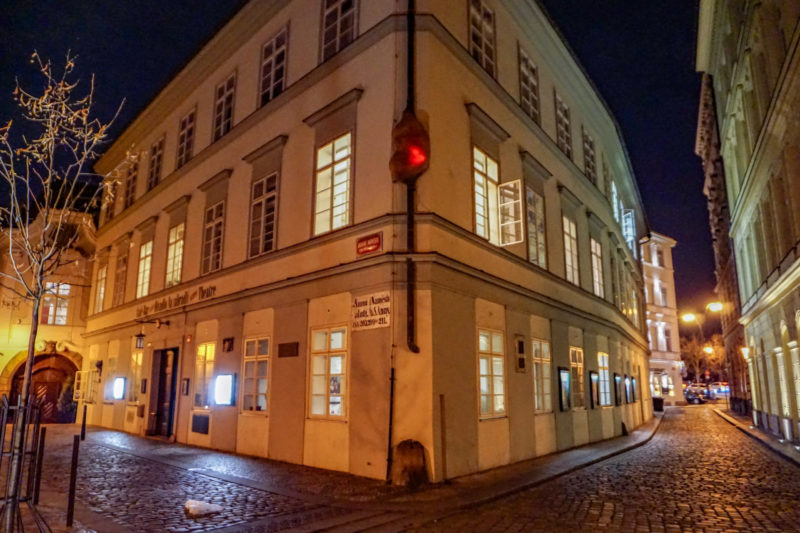 The hanging man above your head is Sigmund Freud, who was born in Freiburg, which is now part of the Czech Republic. It looks like he is about to commit suicide. You might easily miss this artwork if you don’t walk with your head up. It might refer to the role of intellectuals in a new millennium, but don’t ask me why. 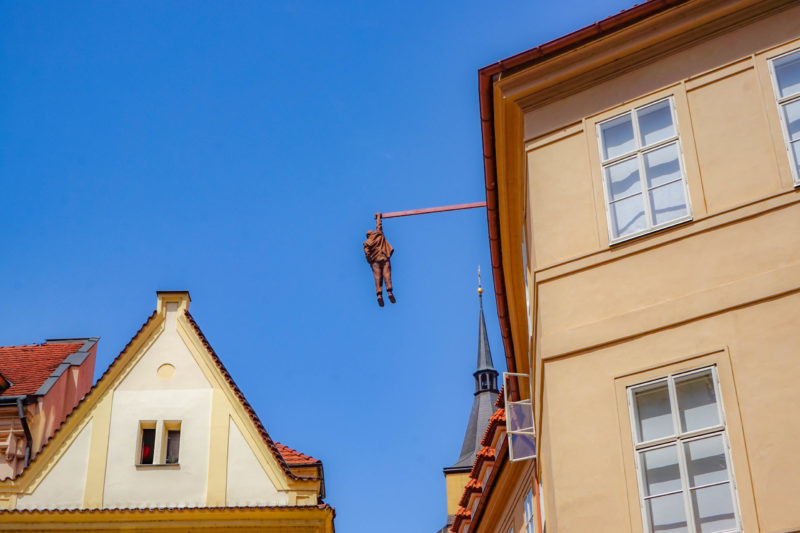 You might know the horse statue of St. Wenceslas on top of the Wenceslas Square. However, there is also a parody on this just a few meters away. In the middle of the square is the Lucerna passage, where you can find the statue of a dead horse with St. Wenceslas sitting proudly on his belly. This sculpture supposes to stay here until the constitutional monarchy is restored in our territory.

Location: Lucerna Palace atrium, Štěpánská 61, Prague 1. From here, you can take three metro stops from Můstek to Jiřího z Poděbrad. Here you will find our next stop, the Žižkov TV tower with giant babies of David Černý. 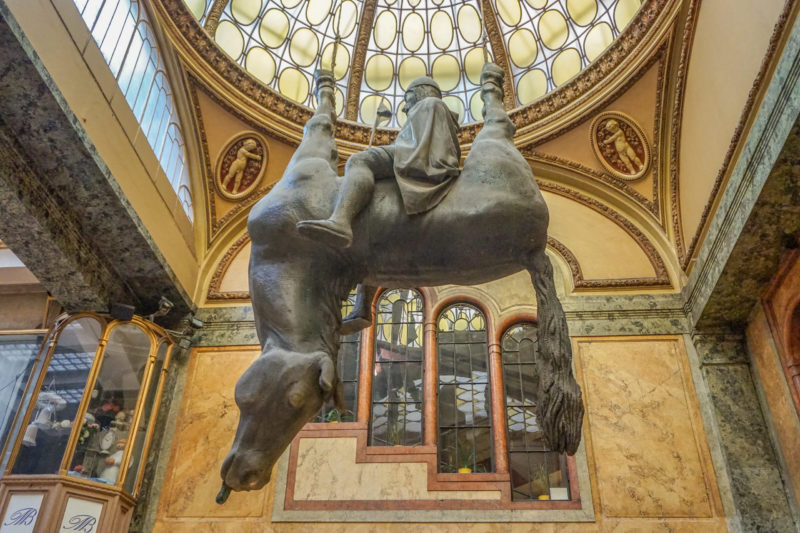 Žižkov TV tower is visible from almost every corner of Prague. However, you might barely see ten crawling babies from a distance. Initially, they were installed for one year in 2000, and they became an integral part of the Tower identity. However, not everybody likes it. In 2009, the Tower was rated among the ugliest construction on the world and babies as a kind of hideous contribution to that. It is up to you to make your personal opinion, and the best way is to see it with your own eyes.

What I recommend is the visit to the tower. You can enjoy here one of the best views of Prague. You can visit the Oblaca Restaurant or take a lift to the observation point. There is also a famous One Room Hotel where you can enjoy unforgettable sunset and sunrise over Prague.

Location: Žižkov Television Tower, Mahlerovy sady 1, Prague 3, after the visit, get back to Můstek 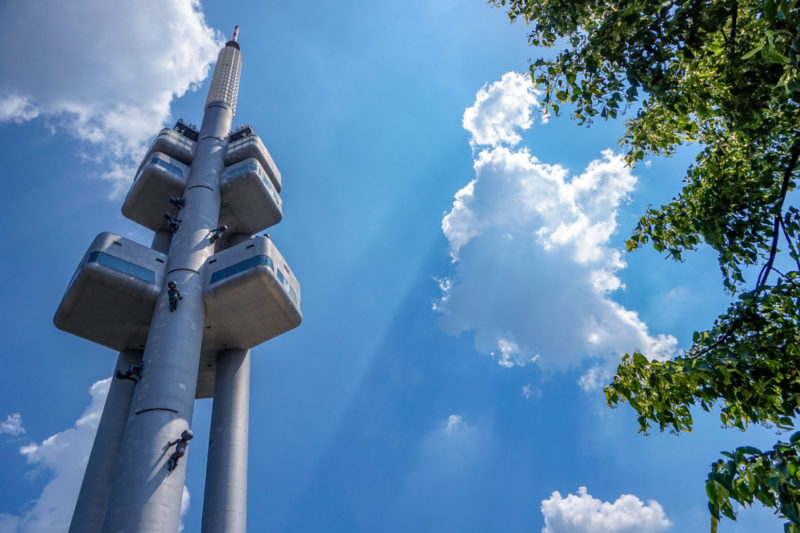 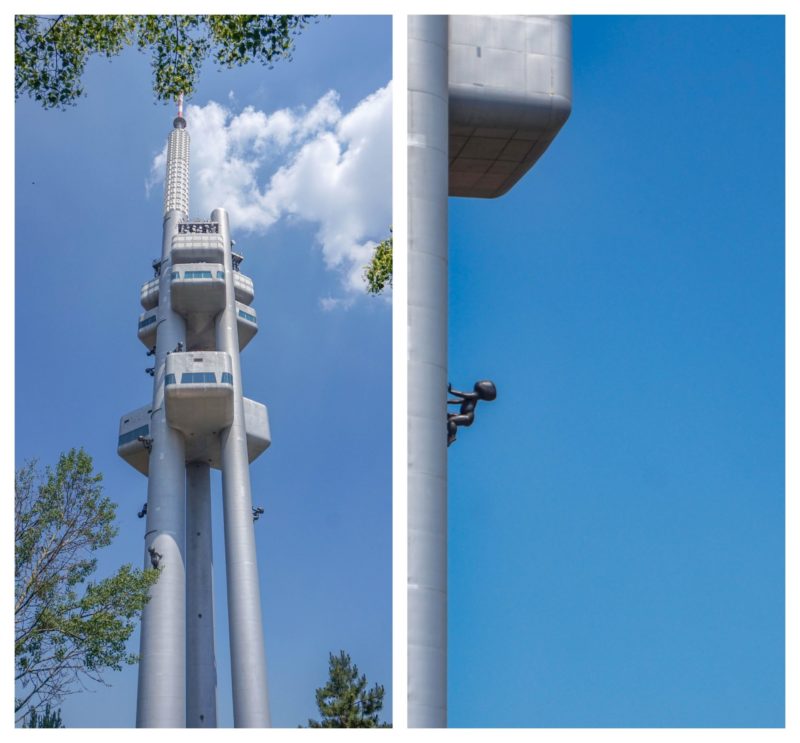 This Head of Franz Kafka is the most distinctive sculpture in the public space of Prague. Since 2016, we can admire this idea of 42 rotating metal plates that consistently reveal and unreveal the face of Franz Kafka. 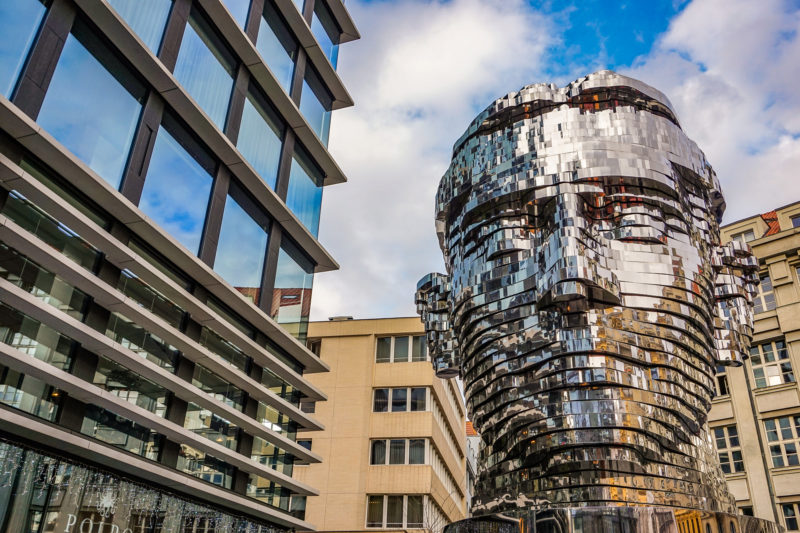 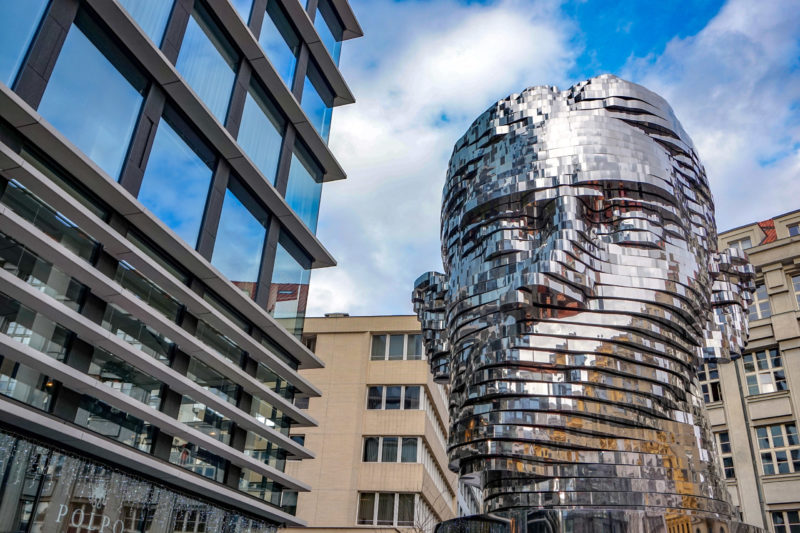 I discovered this piece only recently, so we have one extra tip. These three women have a lamp instead of their heads. It is not easy to spot them, so make sure you know the address and lookup for these ladies. 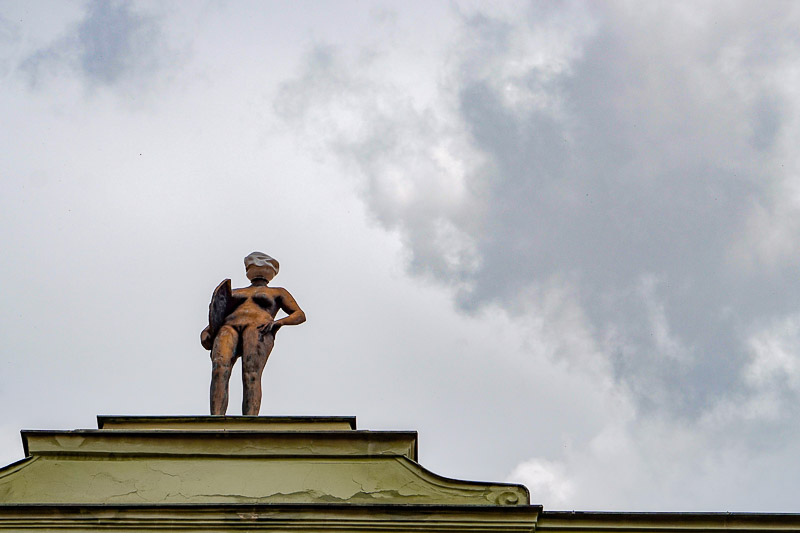 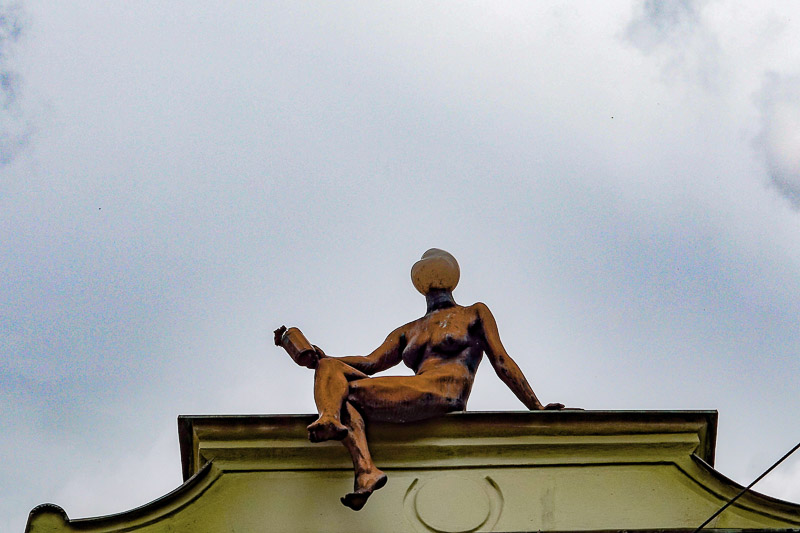 On August 21, 2018, we commemorated 50 years since the Soviet occupation of Czechoslovakia in 1968. On this day, David Černý situated Torso of the invasion tank in typical green color with white stripe (not pink anymore, like in 1991). It supposed to be installed here for two days but remained until today. 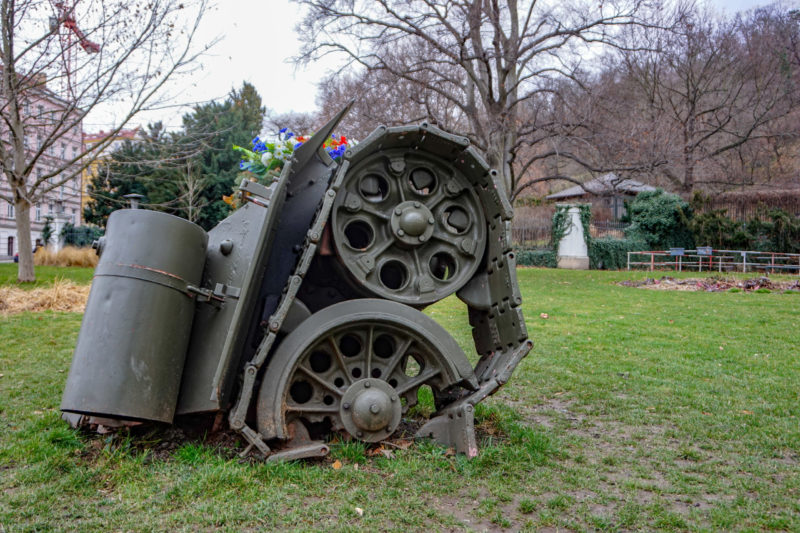 The most controversial of Černý’s statues is located a bit out of the center. However, it is worthwhile to explore. Imagine two giant naked statues with a ladder leading into their anus. If you climb it, curious what is inside, you will discover a video of two Czech politicians feeding each other with a spoon while playing the song “We Are the Champions.” I think that such a metaphor can refer to every country. 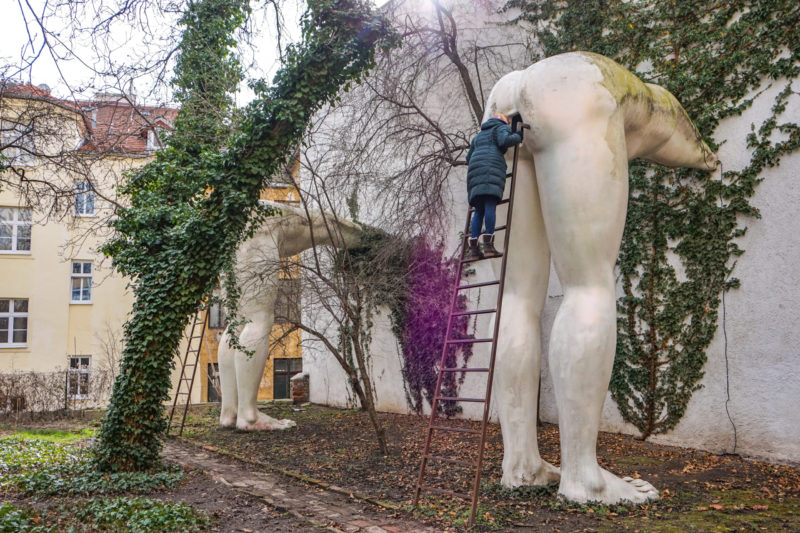 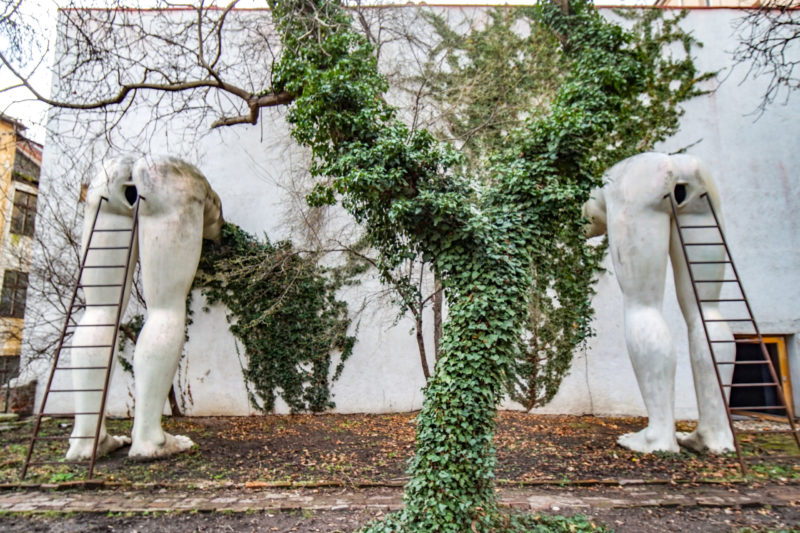 David Černý himself founded this center for contemporary art in 2001. This industrial building used to be a meet factory; here comes the name. On the façade of the building are two giant red cars, hanging upside down.

Waltrovka is a new residential complex by the metro Jinonice. Just a few years ago, it used to be a brownfield with a decaying factory Waltrovka which produced an aircraft engine. As a tribute to the past, David Černý created three Pegasus with bodies of horses and with rotating engines instead of heads. 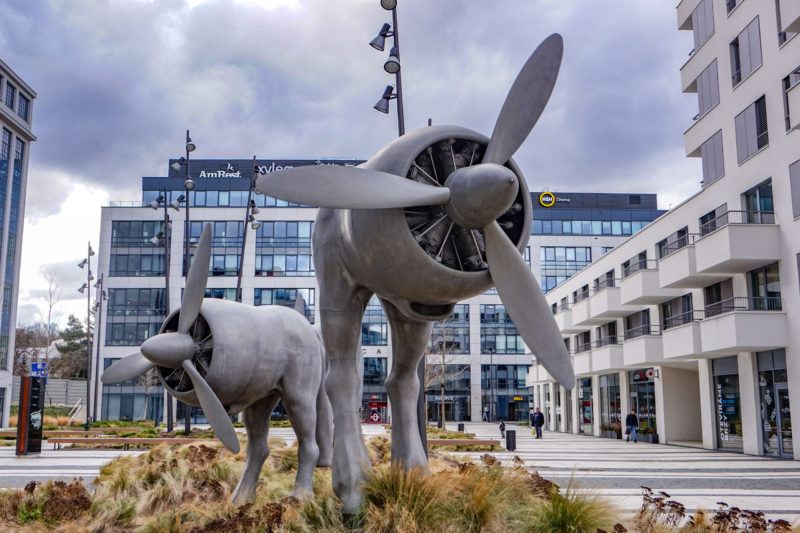 Speederman represents a superhero frozen in the fast movement. Movement lines behind the figure capture this movement. This 4 meters high sculpture is also a metaphor for the fast lifestyle of modern humankind in the technological world. 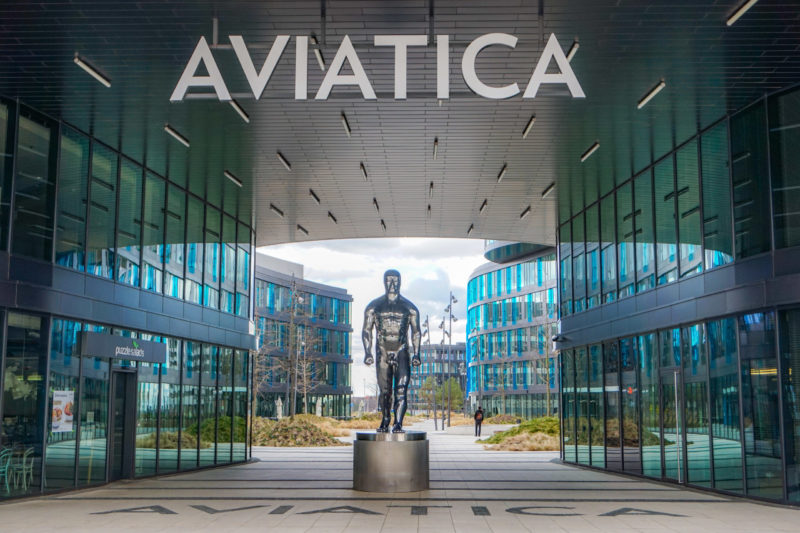 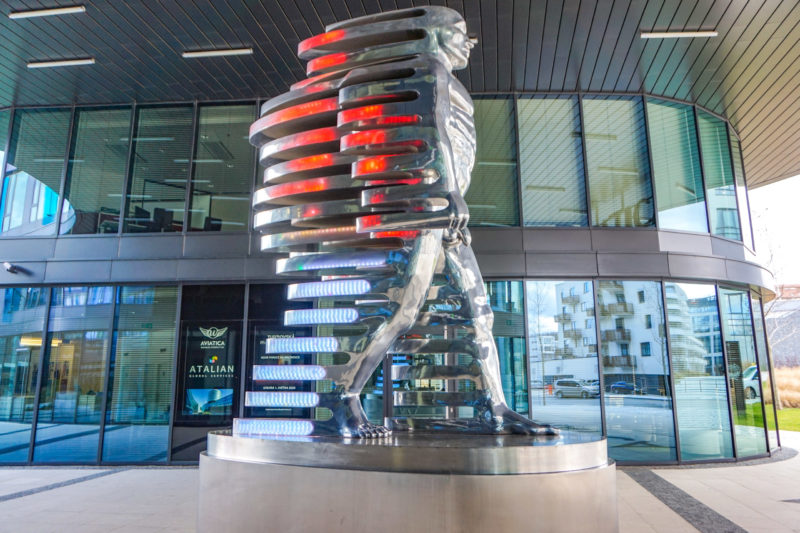 Trifot is 12 meters tall creature that stands on the tripod legs. The head is created from different kinds of cameras that were popular over the last few decades. Trifot has several eyes around its head that are closely watching pedestrians walking by and display them on four large screens. Don’t worry, the records of people disappear immediately and are not stored anywhere. 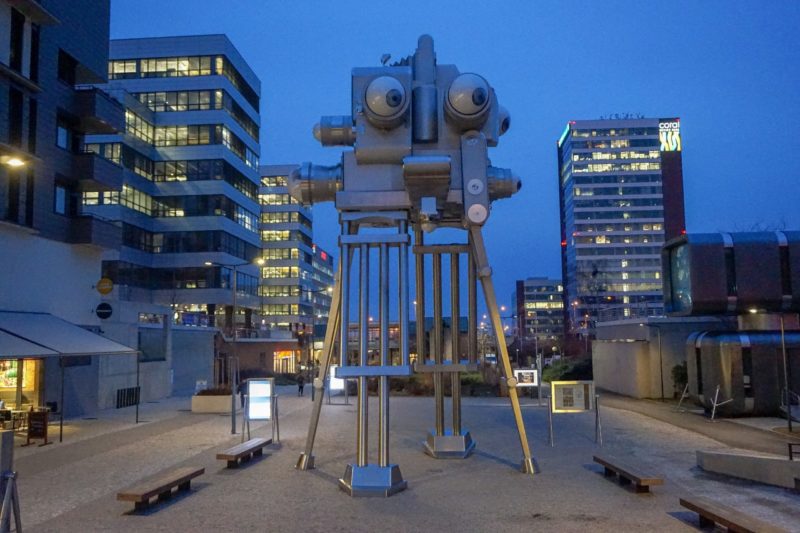 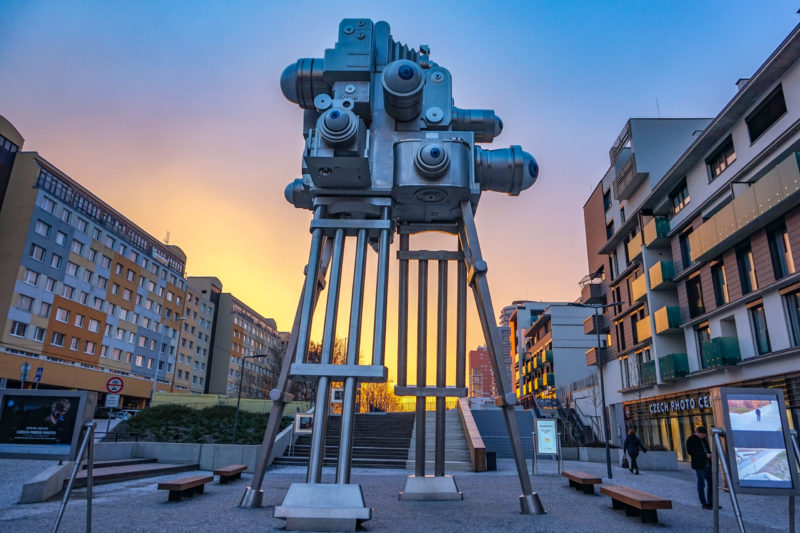 Cyberdog is a two-floor building made from the material of a spaceship that might evoke you the shape of a dog. Inside of this creature is a futuristic wine bar and restaurant that is served by a robotic hand, Kuka. Inside, you can find details made by David Černý, such as human eyes, the hair on the staircase, and another part of the bodies that you should better discover by yourself. 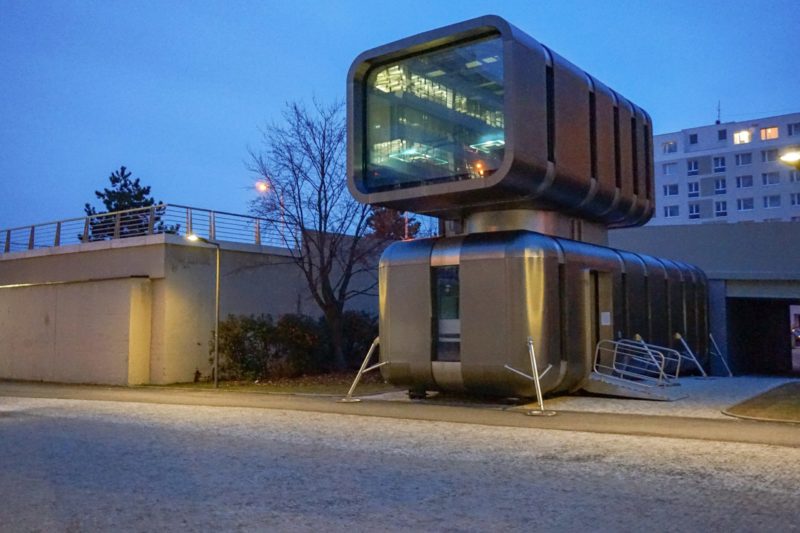 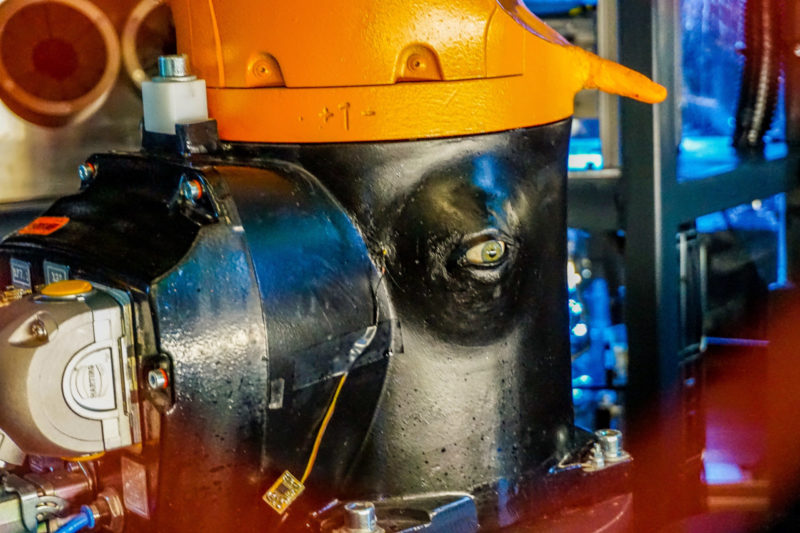 My favorite city of Olomouc has a piece of David Černý as well. On the façade of the Museum of Modern Art, you can find a small statue of this burglar. 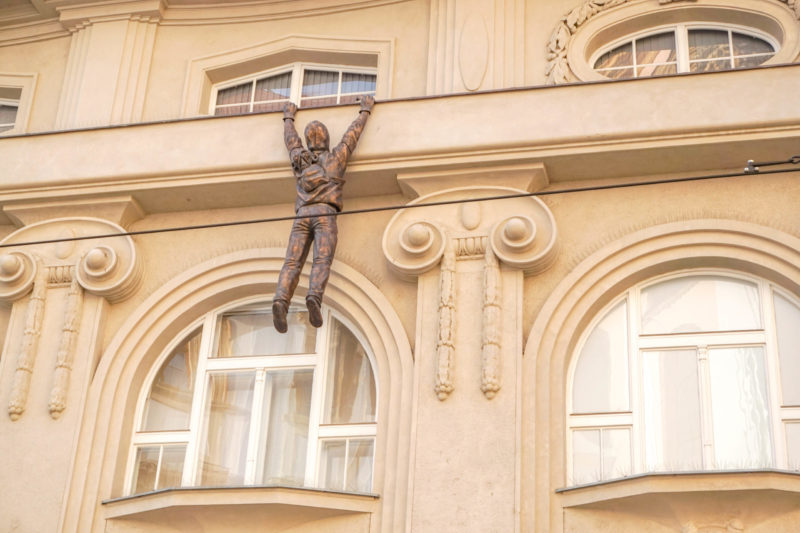 At the very end, I should not forget his piece that created huge controversy during the Czech Presidency to the EU in 2009. His Entropa depicts stereotypes of the EU member states, sometimes in a controversial way. For example, Bulgaria is portrayed as a squat toilet and Germany as an interconnection of highways in the shape of a swastika. Today, you can find it Techmania Science Center in the city of Plzeň. 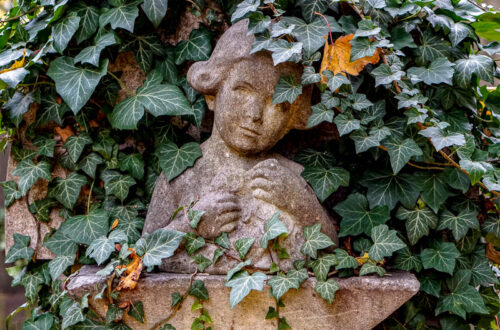 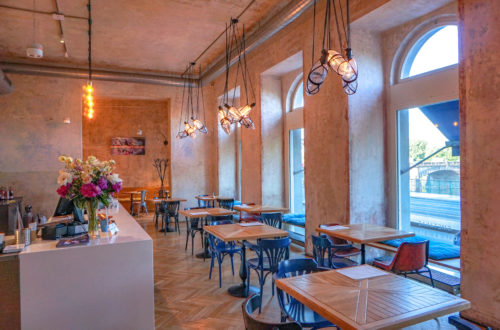 SmetanaQ: Café in the Hub of Students and Designers 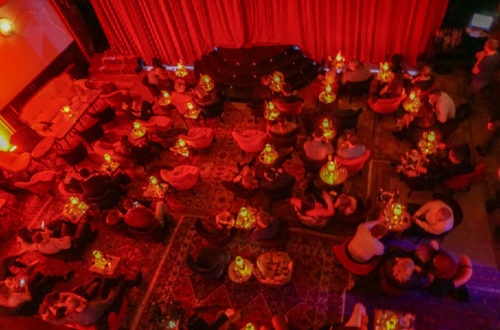