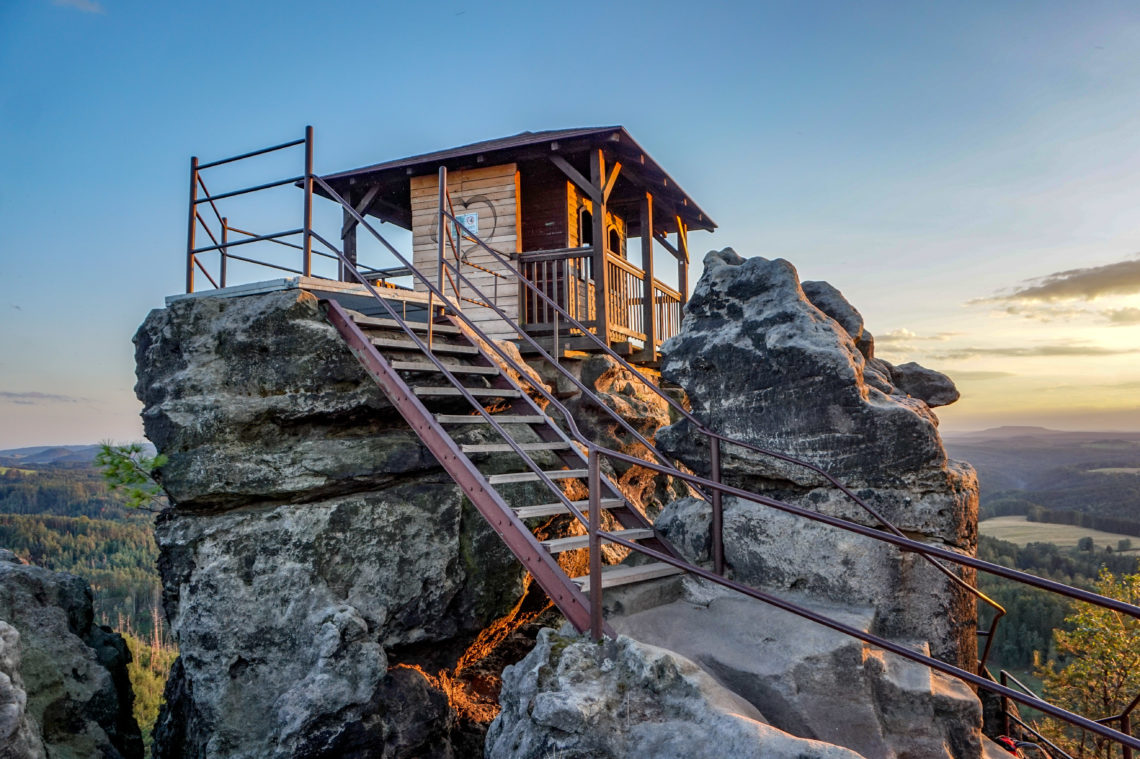 You might already know the Pravčická Gate, but the local heart of Bohemian Switzerland lies in Jetřichovice. Let’s explore the fascinating viewpoints and remnants of medieval Bohemian history.

Jetřichovice is a picturesque village full of wooden houses, and also a touristic center of Bohemian Switzerland. Thanks to the fantastic views from the nearby rock formations, Jetřichovice became a popular touristic location already in the 19th Century. The Kinský family constructed viewpoints such as Mary´s viewpoint, Vilemínina stěna, and Rudolfův kámen, from which you might enjoy fantastic views over the hills of Bohemian Switzerland.

If you continue a bit further, you can also visit the ruins of the medieval castle Šaunštejn and also a medieval mill. From this mill, you are not far from the main touristic route on the Pravčická gate. However, I would recommend you to keep the Pravčická gate for another one-day trip. Take time to explore Bohemian Switzerland. This location can offer many remarkable places.

The lookout at Mary’s Rock is the best-known destination in Jetřichovice and also one of the symbols of Bohemian Switzerland. People admire the view over the hills of Bohemian Switzerland National park since 1856 when the Kinsky family constructed a wooden cabin on top of the rock. The panorama is epic, especially during the sunset, but also during the foggy mornings in autumn. It requires some effort to climb here, but the reward is outstanding. 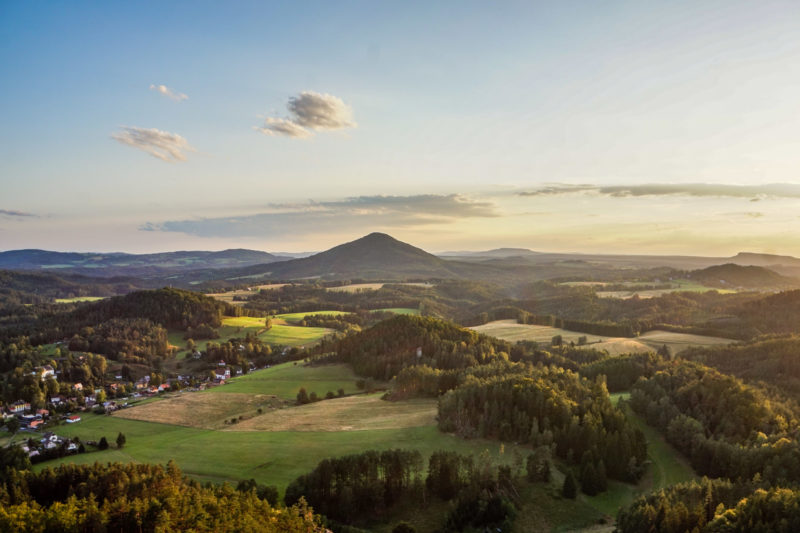 When you continue by the red trail, you will reach Vilemínina stěna, another lookout constructed by the Kinsky family. Initially, you could find here a wooden cabin as well, but it disappeared over time. Anyway, you can still enjoy views over the hilly countryside, with dominant Růžový Vrch. I also like the distant view on Mary´s viewpoint that is photogenic from this point of view. 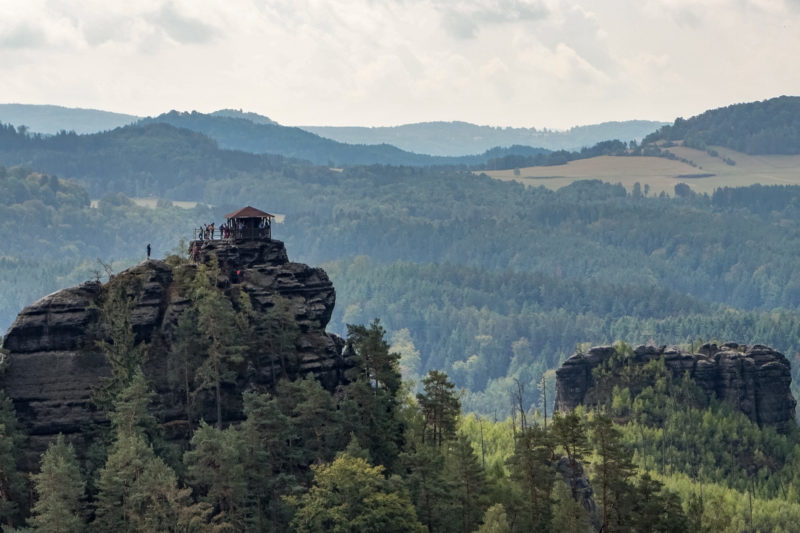 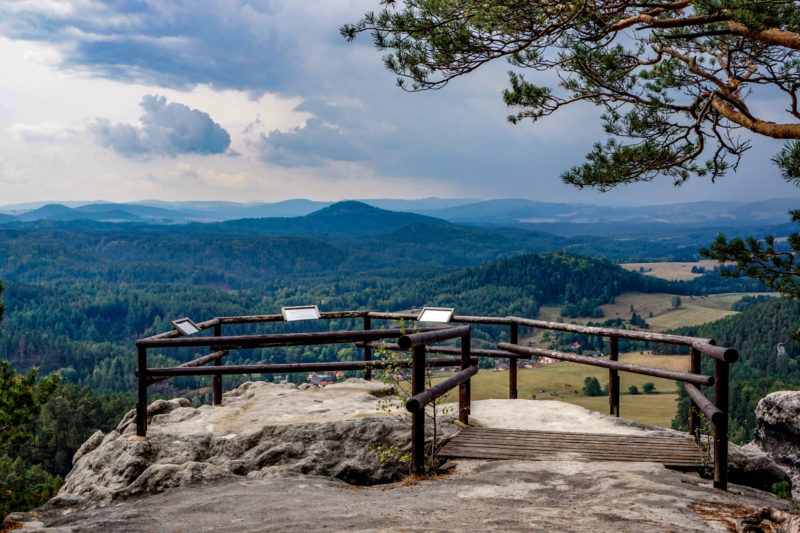 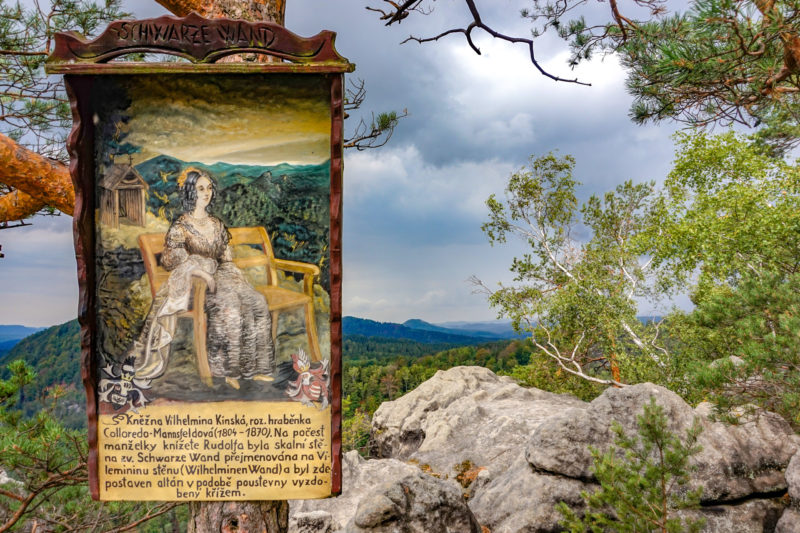 A third viewpoint on the red trail is Rudolfův kámen that means Rudolf’s stone, named after prince Kinsky. You need to climb 170 steep steps to get there, and you will be rewarded by a 360° panorama over the Bohemian Switzerland that is not possible from Mary´s viewpoint and Vilemínina stěna. 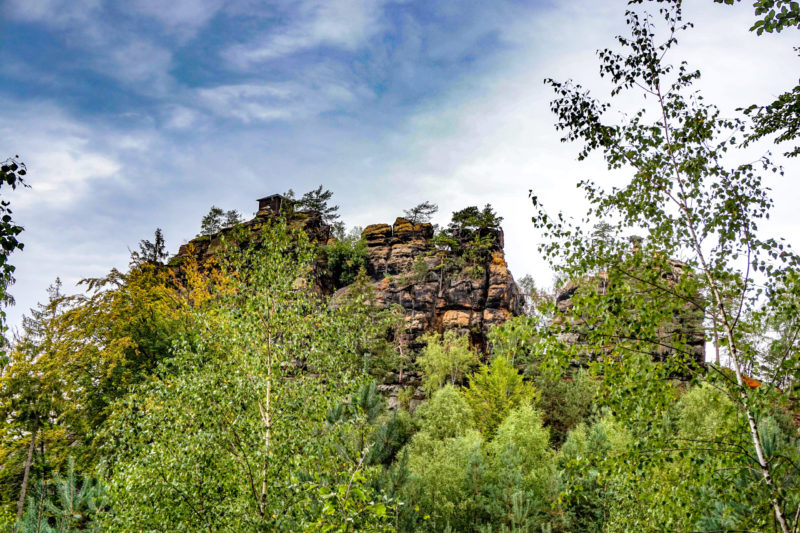 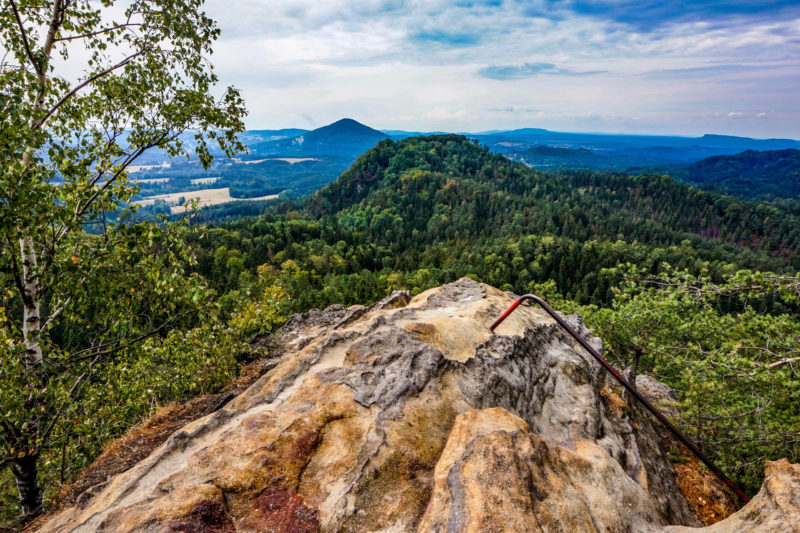 After you explored the main three viewpoints of Jetřichovice and you are still eager to discover more, continue by the red trail to Šaunštejn Castle. Today, there are only ruins of this medieval castle, but the views are amazing.

Originally, this castle stood at the Old Bohemian Road, the trade route between Bohemia and Saxony. In 1444, the castle was conquested and became home for robbers and bandits. Today, you can reach it by a difficult construction of steep stairs and narrow lines between the rocks. Once you manage it, you will be rewarded with remnants of medieval life and amazing views over a large part of Bohemian Switzerland, but also some peaks on the Saxon part. 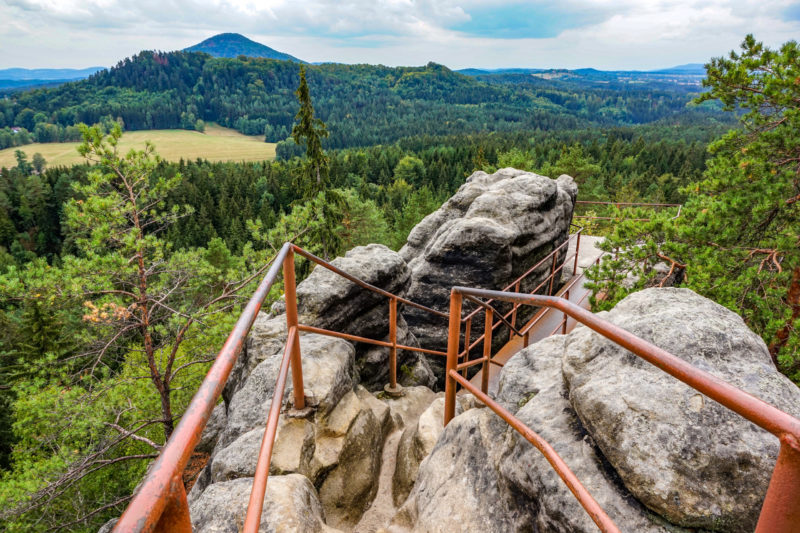 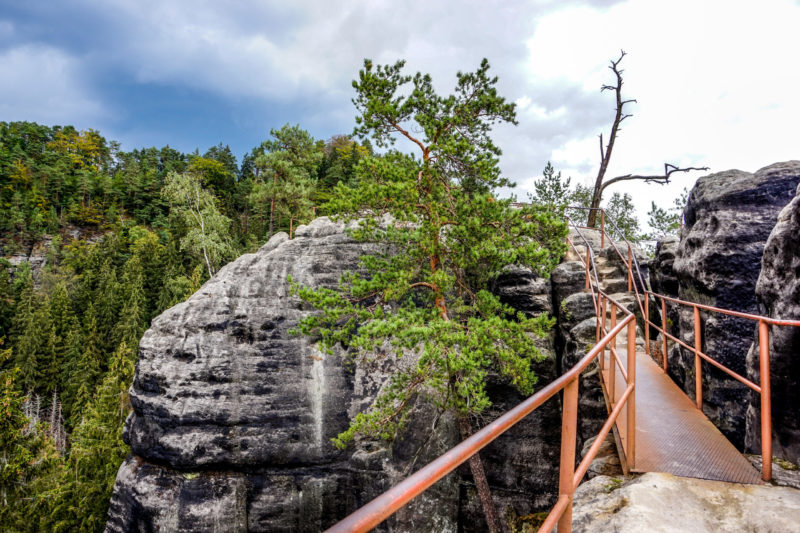 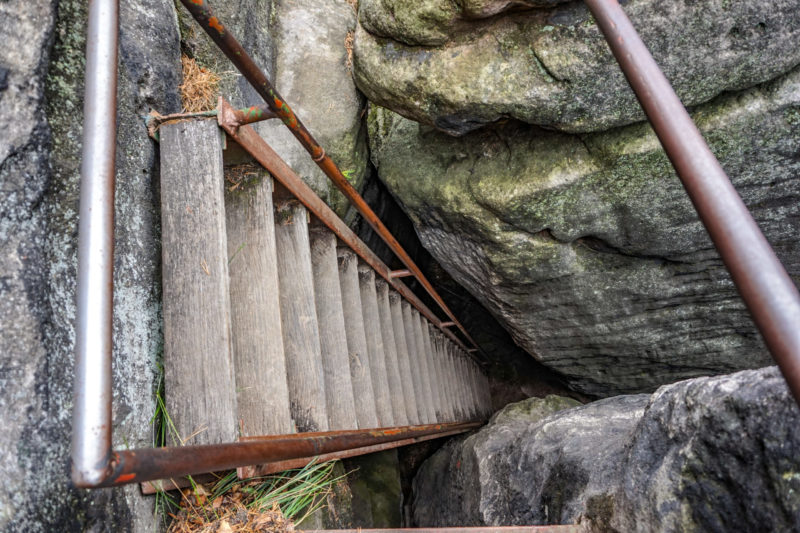 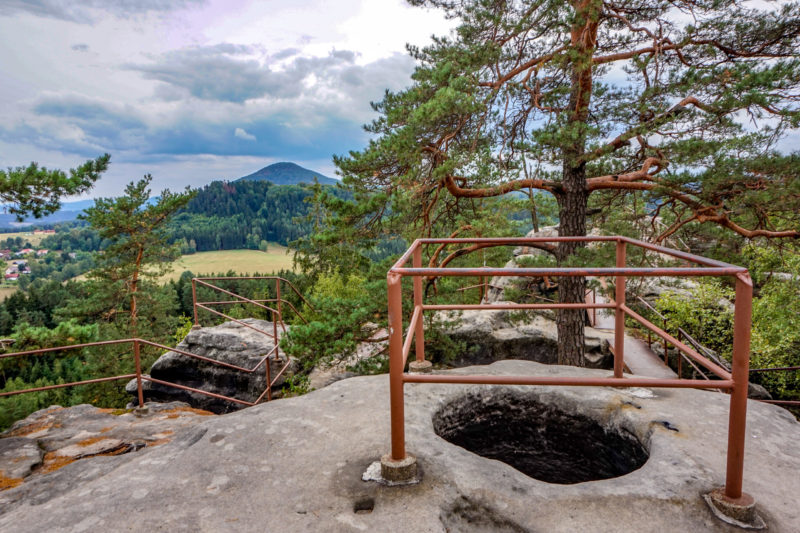 If you are ready to explore the area, even more, I would recommend you to continue to the ruins of medieval Dolský mill (from Šaunštejn Castle, take a yellow trail, and continue by a blue trail until you reach a river Kamenice).

This mill is famous from several Czech fairytales. That is maybe why it is still a popular hiking destination. This medieval mill became a popular restaurant with the opening of the river Kamenice to tourism, in 1881. Since WW2, the mill is falling into ruins. Today, you can freely walk through the remnants of the whole building. 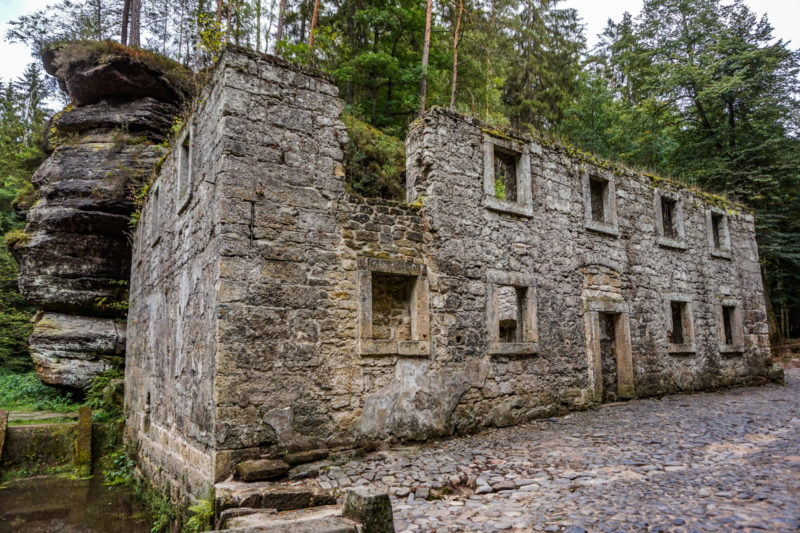 Start your trip in Jetřichovice where you can park your car, take a map in the touristic center, and start your hike to Mary´s viewpoint. This itinerary includes the route containing:

This itinerary is a great one-day trip around the most exciting destinations in the area. 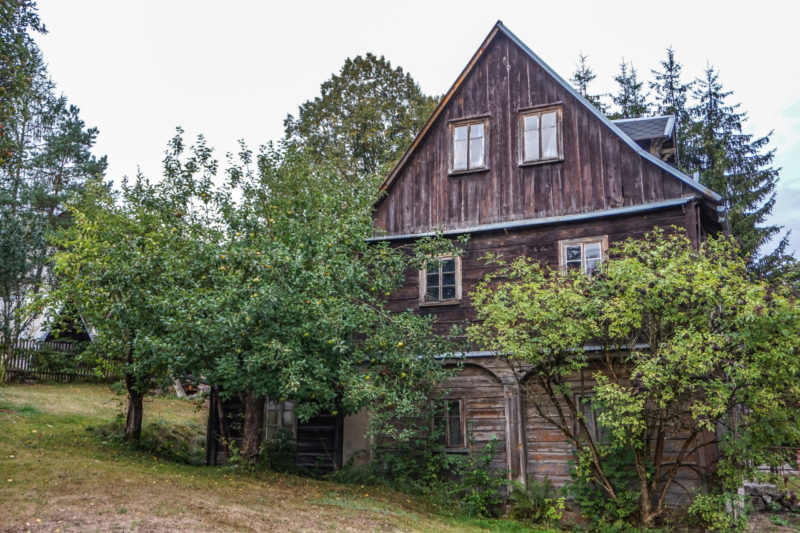 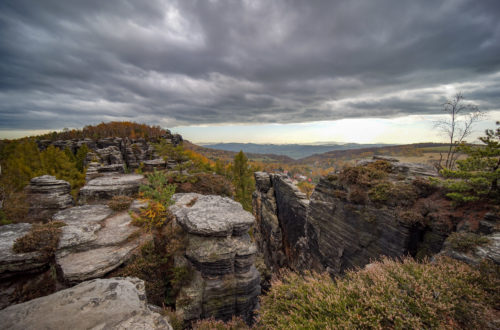 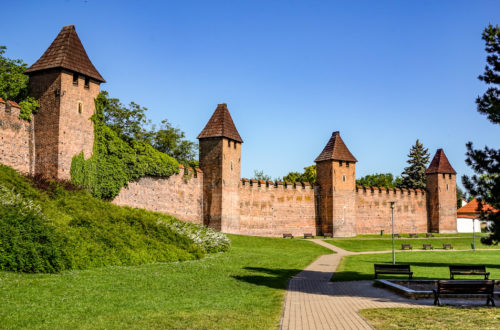 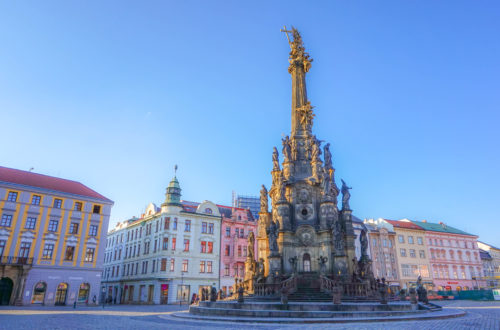